Who Was Erik Rhodes?

Home » All entertainment » Who Was Erik Rhodes?

Erik Rhodes is one of those actors from the dim and distant past whose name no one remembers.

But the instant he appears on screen you know.

He was a Broadway bit-parter born in Oklahoma who hit upon a role that propelled him to stardom. He played a thick-skinned suave continental gigolos so well that he would almost steal the show from Fred Astaire and Ginger Rogers with the finest barrage of one-liners in movie history. Twice. 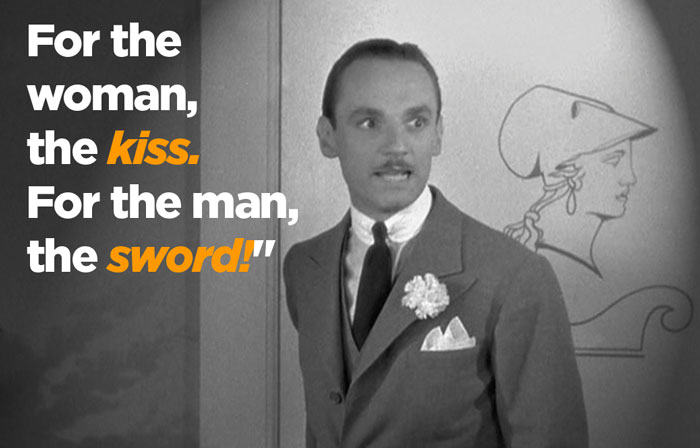 “Cara mia, you makka big mistake. I am no man. I am Beddini!”

“Why not face the musicians now?”

“I am very displeased to meet you!”

“For men of your kind, This is not a healthy place! I warn you…never let your path criss-cross mine again or the heart cease!”

“For the woman, the kiss. For the man, the sword!”

“No, I cannot kill him before a lady.”

“I will not listen to any excuses, not even the truth!”

“The little birdies have come flying back to the rooster.”

“Your wife is safe with Tonetti, He prefers spaghetti”

“I am ready for action, and I will do a first-class job.”

“Fate is the foolish thing. Take a chance.”

Rodolfo Tonetti or Alberto Beddini, Erik Rhodes made an unforgettable debut on the silver screen. RKO even gave him a starring role in the same clueless Italian style. The plot revolves around a deusional cook Leopold, who has delusions of being a great chef who ends up at the Ritz as a famous foreign chef.

At the time Italian officials were very offended by Rhodes characters to the point where both ‘Gay Divorcee’ and ‘Top Hat’ were banned across Italy. The famous line  “For the women the kiss, for the men the sword” ­ was originally supposed to have been “For the men the sword, for the women the whip.” It was changed after Hays Office censors objected. Rhodes characters were both mentioned in the  documentary film The Celluloid Closet as an example of a kind of ‘coded’ homosexual common in pre- Hayes code Hollywood. Effete characters like this were sometimes created to push the envelope with double entendres and bawdy humour.

His career on Broadway and in movies was strictly second feature stuff –  “Charlie Chan in Paris,” “A Night at the Ritz,” “Nitwits,” “Old Man Rhythm,” “Chatterbox,” “Music for Madame” – He had a good baritone singing voice, which added to the opera-loving European characters he was so good at playing  –

But his work with Astaire and Rogers still shines brightly. Here’s a lovely scene with the three of them, Erik Rhodes playing a paid correspondent- tied quite literally to Fred.