Home » All lifestyle » Young Scientists of the Google Science Fair 2015 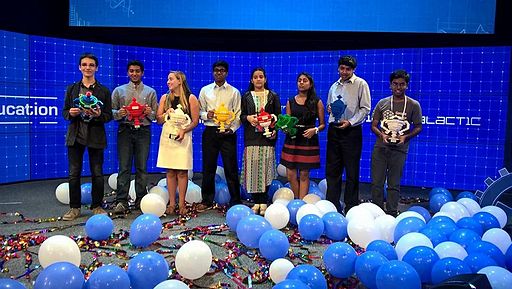 Our Youth at Their Best

Google recently announced the winners of the Google Science Fair for 2015.  The science awards go to youth between the ages of 13 and 18. Once again, the winners—and all the contestants—amaze.

If science is your forte, perhaps it comes as no surprise to you that teens as young as thirteen would have such success.  For me, it surprises me every year.  While some teens are undecided about their futures, to see some not only question, but then research, test, and create solutions to serious issues we face today, is very impressive.  I hope you will look at each of their projects, the knowledge each shows is profound.

This year Olivia Hallisey, now 17, took the Grand Prize at the 2015 Google Science Fair, after creating a fast and inexpensive test for the Ebola virus.  The Connecticut youth was struck by how long it took with previous tests to determine if the virus was present, then went about finding a better way.

While previous tests have been costly as well as time consuming, taking days if not weeks, Ms. Hallisey created a test strip that shows results in only thirty minutes!  Not only that, but the cost for the test is only $25.00.  Lastly, and possibly as important, the test is stable at room temperatures.

All previous tests required refrigeration and very strict handling of the test material to be effective. Since Ms. Hallisey’s test does not require refrigeration, it will be much easier to reach people in outlying, rural areas.

All three benefits allow the opportunity to supply any treatment quickly.  Since the disease is often fast moving, determining if a test is positive so quickly gives a better chance of stopping it before it is too advanced. The cost makes it far more affordable to use over a wider range.

It is an incredible invention that has the possibility of stopping dreaded disease.

You can see her full presentation here.  I hope you will check out each of the links shown.  It speaks so well for our future.

Just as Ms. Hallisey was aware of the need for a product that didn’t need refrigeration, so Anurudh Ganesan, age 15, saw the need to provide refrigeration that did not require electricity.

The young man from the United States created the Vaxxwagon, a transport to deliver medical supplies and vaccines that must stay cold.  His works, powered by human or an animal, without the need for electricity.  Invaluable to get to out of the way places without power.  Do check out his research here.

The third we will include here is 14 year old, Krtin Nithiyanandam, from the United Kingdom. He was selected for the Scientific American Innovator Award.

The young man has created a new and earlier test for diagnosing Alzheimer’s disease.  He developed a “quantum dot probe that can potentially cross the blood-brain barrier.”  At 14!

Learning that beta amyloid oligomers are present early on in those with Alzheimer’s disease, he determined to find a way to reach them.  To protect the brain, the blood brain barrier allows only a few select objects to pass through it.  Using specific antibodies that are able to attach to specific “receptor mediated transcytosis”  Mr. Nithiyanandam was able to able to cross the barrier.

He is currently working on other uses for the invention that may be effective tests for other diseases.

Take a look at his complete submission here.

These are just three of the winning projects.  There are many more to explore here at the Google Science Fair site.   If these youth are already succeeding with these important inventions, don’t you wonder what they will be doing in another five or ten years?  No doubt we will be hearing more about them.