Who was Zora Neale Hurston? 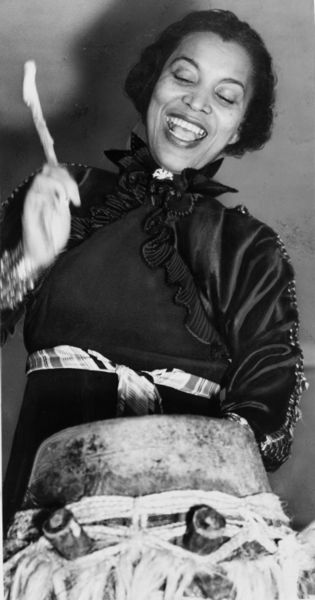 The nineteen thirties were a strange time in the USA. When most people were struggling with the effects of the Depression, Zora Neale Hurston was travelling and living in Florida, Jamaica, the Bahamas and Haiti – studying voodoo.

She is remembered today as a folklorist, anthropologist and writer, yet she came from a childhood which featured deprivation an segregation in the rural southern states.

She was born in 1891 in Alabama but her family soon moved to Florida where she was brought up.  Eatonville – her hometown in Florida –  was one of the first incorporated ‘black towns’ in the States.

When she was thirteen, she decided to leave home and live on her own.

There were few job openings in those days, especially for a young black girl, so she started working as a maid. But she was determined to better her lot. and eventually,she won a scholarship to attend college.

There, a pair of eminent anthropologists recognised her enthusiasm and skills and helped her to gain grants to further her education and explorations.  In 1928, she moved to New Orleans. This was in order to begin studying the folklore and traditions of African American society.

This wasn’t just the society of the day – she wanted to explore the origins of the traditions and beliefs that existed. She also wanted to study the effects that slavery had had on the black society as a whole.

She soon discovered, and wanted to learn more about, voodoo.

But this was a closed secret. No-one was prepared to discuss voodoo with her.She realised that she would have to explore the topic as an insider. In New Orleans,she studied with well-known, noted practitioners.

Dust Tracks on a Road: An Autobiography (P.S.)

She quickly discovered that New Orleans had a large voodoo  presence, it was only the tip of the iceberg – she wanted to travel to the roots of the beliefs. She was determined to go wherever she needto in order to enhance her studies and find out more. She started in the Bahamas, then travelled to Jamaica, then to the voodoo’ capital’ of Haiti. Her travels and her discoveries were exciting – and disturbing but she found that many of the rituals and ceremonies that took place in the Caribbean were of African origin.

She was particularly interested in the beliefs about spirits. She heard about ‘duppies’ which were believed to be spirits. But then there were more serious spirits to study – zombies.

She wrote that zombies were at the very heart of voodoo; that they were the ‘living dead’. She discovered that it was thought that zombies could create other zombies when required by ‘sucking out the souls’ of people who were sleeping. This might be as a punishment, because of a grudge or because they were needed as free labour. She wrote that ‘the victims can move and act but not formulate thoughts’.

By 1937, she considered that these studies had become to dangerous to continue. She decided to broaden her studies to embrace the non-spiritual beliefs and customs of the Caribbean. More and more, it was the music, the art and the dancing that she came to love.  She published autobiographies, novels, plays and details about her research.

Although these were widely acclaimed, she fell on hard times and when she died in a welfare home in 1960, was buried in a pauper’s grave.

We are lucky that her writing survives. When she died, her papers were burned as trash. It was only because a passing policeman saw the fire – for which a permit was required – extinguished the flames. Many years later, her work was rediscovered and she is now acknowledged as a pioneer in studies of African American and Caribbean cultures.