Cinnamon Rolls From The Bread Machine

Home » All food » Cinnamon Rolls From The Bread Machine 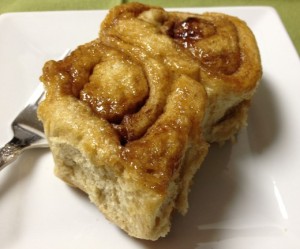 Fresh Baked Cinnamon Rolls, Right Out of the Oven

My adorable Norwegian grandmother would always have a pan of fresh cinnamon rolls just out of the oven whenever we came to visit her. I can see her still, standing in her little kitchen, pulling them from the oven, flipping them over to get them out of the pan.

She would serve us coffee, with a little cream, in a very small cup, since we were very young. Coffee wasn’t a drink we would normally have.

We would visit Grandma and Grandpa nearly every vacation we had, staying with them, sleeping on a fold down chair and couch (that we thought was the coolest furniture in the world). Those visits are some of my best memories growing up.

Mom continued the tradition, making cinnamon rolls every so often, always delicious. I wanted to make them for so long, but kept putting it off because it seemed like it would take a lot of fuss and a long time. Making dough sounded like too much trouble.

Then along came my bread machine. At first I used it strictly for making loaves of wonderful fresh bread. Once I finally decided to try rolls in it, I was delighted to see how easy they were. To me, the hardest part of making bread is not just the mixing and the kneading, but also knowing how long to let it rise. The bread machine makes it easy. If you’d like to read more, here’s my complete review about my Panasonic bread machine.

Toss in the ingredients, set it on the dough cycle, and let it do its thing. When the dough is ready it is so easy to roll it out for cinnamon rolls, or cut it into pieces for rolls.

Now I make cinnamon rolls about once a month to have for occasional breakfast treats. Each time, I think of Grandma and Grandpa. Cinnamon goodness, warm comfort food, and sweet memories. What could be better than that?

As with most things, I’ll divide them up and freeze a bunch so I can grab a package whenever I feel like them.

It is so easy. They come out delectable!  You can see step by step photos below.

Here’s all you need:

Save Print
Cinnamon Rolls from the Bread Machine

I love this bread maker. It makes a large loaf of bread, for one thing. The yeast dispenser makes it so easy. Place the yeast in the dispenser at the same time you assemble all the ingredients. The machine will add it at the proper time. You won’t need to stand over it waiting.

Prepare dough in your bread machine 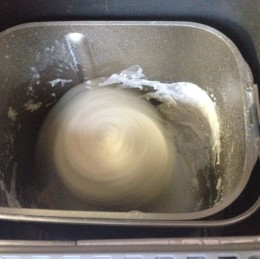 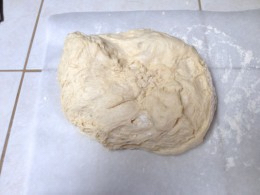 Roll into rectangle, smooth butter on dough, then pour on cinnamon/brown sugar mixture 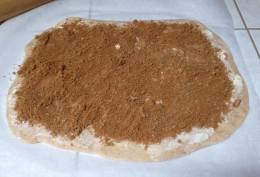 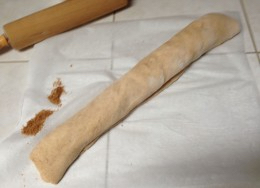 Slice into 12 rolls, and place in buttered pan 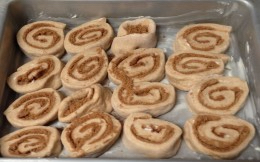 Allow to rise until double 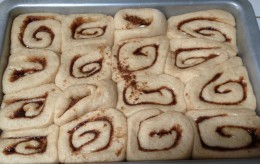 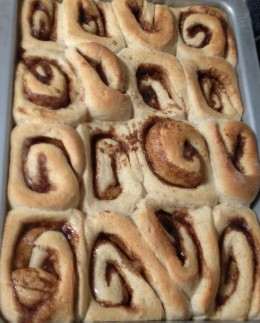 Flip over, onto parchment paper 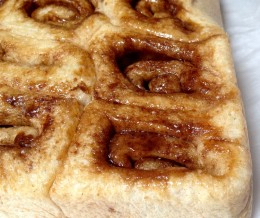 The Essential Parchment Paper by Kirkland

I use this to set the dough on when it comes out of the machine. Then I roll it right on the paper. When it is time to cover the rolls, I’ll often put a piece over the pan before putting a cloth on top. Clean and neat.