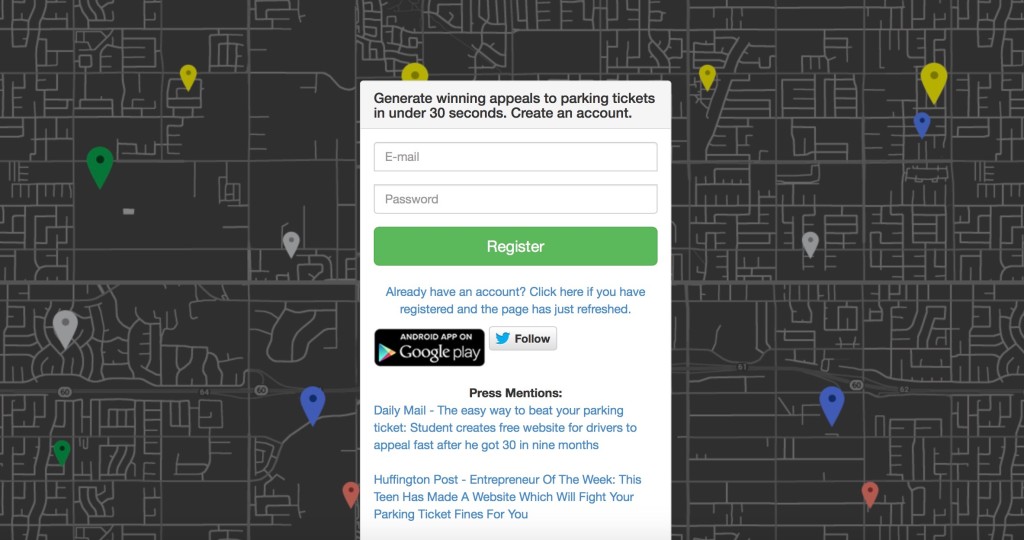 Another invention from a teenager has crossed our desk here at Jaquo Lifestyle Magazine. It is always exciting to learn of a new one.  No doubt there are many more to find.

Our youth have such a grasp of computers, apps, and technology in general. Just as many of our early inventions were created to solve a problem, so today’s youth are creating their own technological solutions. When they need a way to do something, some will find a way to make it happen with a new app or program.

This is a perfect example of that new creativity.

Mr. Joshua Browder, age 18, had received an unusual number of parking tickets.   Each of those tickets required hours to resolve or settle, one way or another.  Whether appearing in court or responding with a letter of dispute, the time it took was preventing him from other tasks.

Researching the top reasons asking for the tickets to be excused, he designed a website to file the appeal.

On his site, DoNotPay.co.uk, if you receive a parking ticket in the United Kingdom, you may choose from one of the twelve most popular reasons for appeal, fill out a simple form, and submit it for review.  It can be done in thirty seconds.

Scotland and Ireland Next?

It is working so well that plans are underway for other areas as well, including Scotland and Ireland. An exceptional solution to a routine problem that can eat up hours of our day, not to mention funds.

Mr. Browder is now attending Stanford University majoring in Economics and Computer Science. That should be an exciting school for his knowledge.  With this successful website completed, don’t you wonder what will be next?  Imagination and skills coming together to save time and money.  Who doesn’t appreciate that?